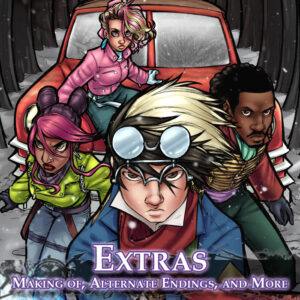 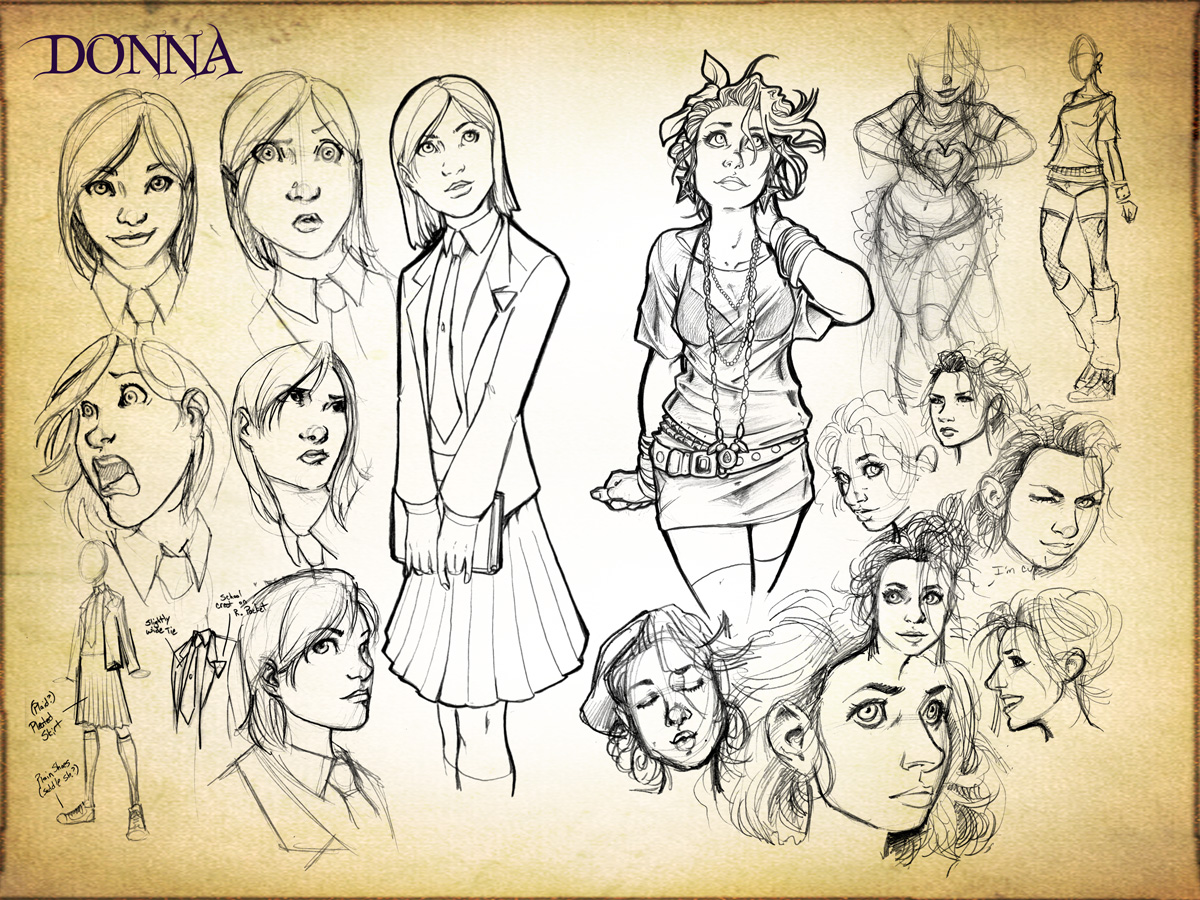 Donna is our protagonist. She’s the normal girl who dreams of a life less ordinary. To emphasize the boring sameness and total control of the Gloom, we put Donna in a school uniform. This strips away her individuality, but once out in the free world of color, it helps her stand out from the ostentatious denizens of the camp.

Comfort designed and drew Donna in her grayness. When she entered color, Adam took over. Though she eventually became as colorful and wild as the rest of the band, she had to maintain some of her nervous awkwardness because she still had to be the entry point for the reader. She’s the one who doesn’t always understand what’s happening and has to figure it out. Her big, expressive eyes were a way to show wonder, curiosity, and finally wisdom as the series reached its finale. Donna had to walk a line between cuteness and intelligence. We don’t believe the two to be mutually exclusive, and building her as a “Girly Sage” made her a lot of fun for us to write and draw. 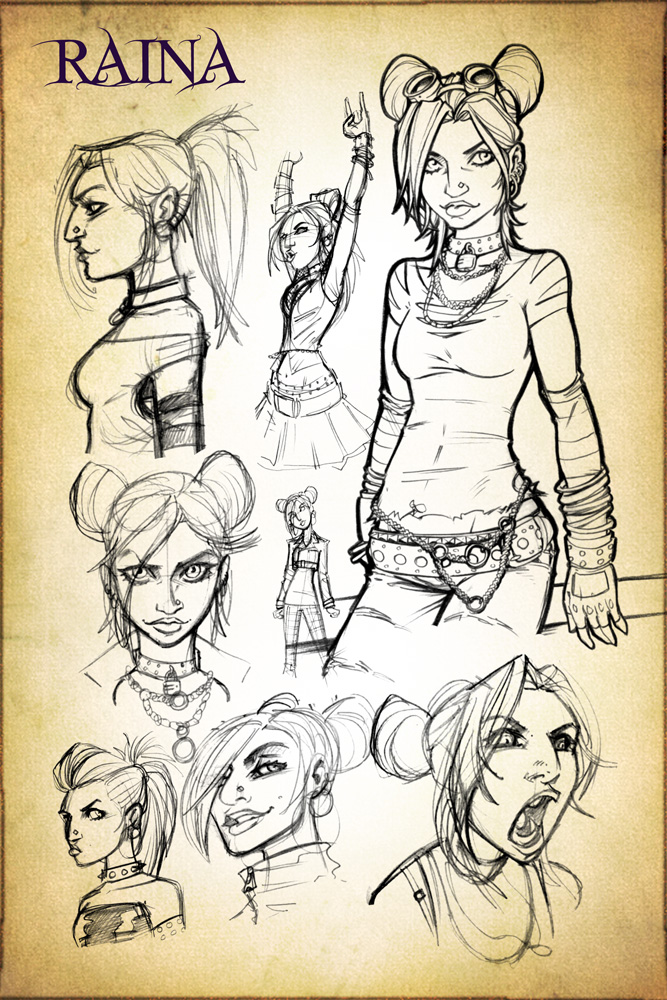 Raina is the swarthy rogue with a heart of gold. She’s Han Solo if he was a teenage girl– an Indian punk rock Princess Jasmine. In the band, she would be the bass player. It’s all about rhythm and the thump for her. She talks loudest, acts wildest, and carries the biggest gun. Working with Raina was really fun because we could just let ourselves go and cut loose. She was the easiest one to design, with her strong nose, full lips (to emphasize her big mouth, heh heh), and those expressive almond eyes. Raina was Adam’s favorite character to draw. 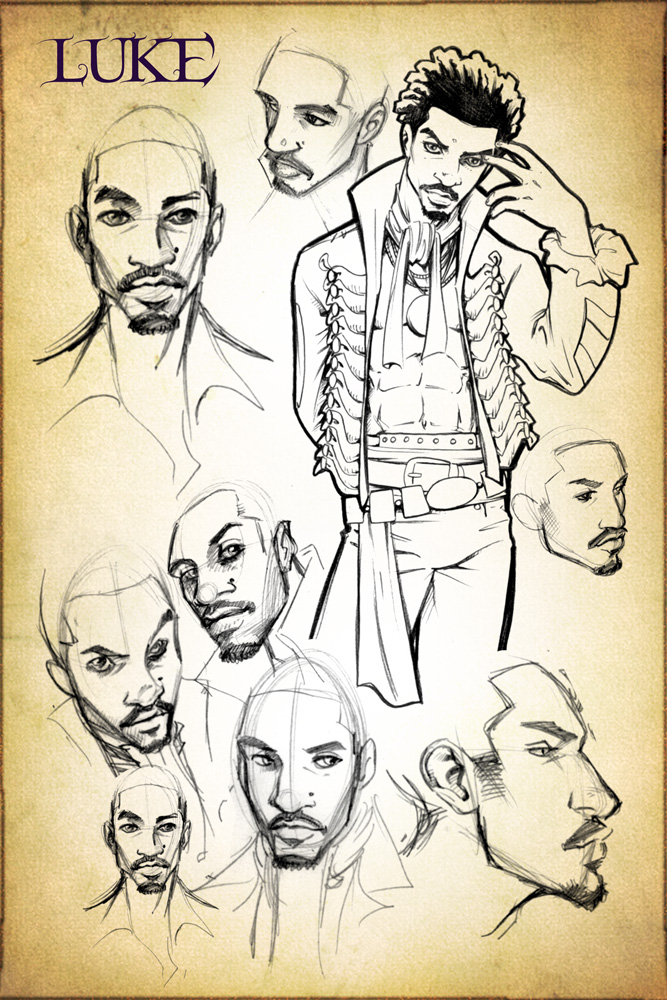 Luke is the ultimate cool. He’s quiet and soft-spoken, but when he has something to say it always means something. We didn’t let him get overly emotional until the third act; his unflappable calm became his defining trait. In the band, Luke is the guitarist. He largely lets his axe aim itself. If you look close, he frequently fires with his eyes closed. Our idea was that he had been connecting with the Current for a long time without knowing it. So when Donna starts sharing how it works, he becomes a prodigy almost immediately. The climactic scene in which he pulls a sword from thin air is something we’d planned from our earliest story discussions. 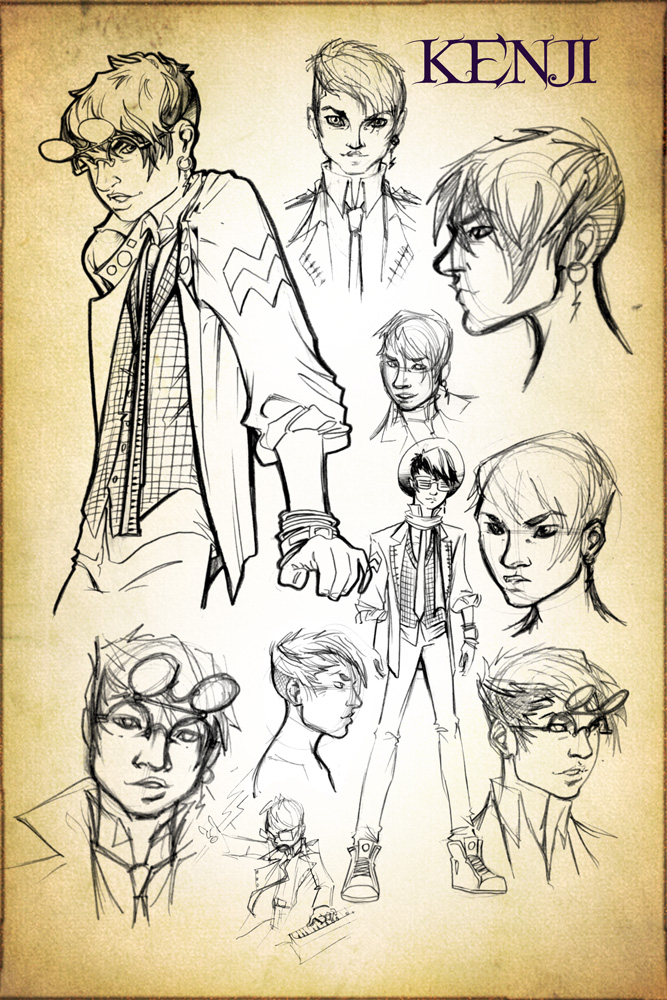 Kenji is the keyboardist in our band theme, which makes him the tech guy and gadgeteer of the group. He’s also the brains of the operation, though it might not always seem that way. Kenji is the youngest member of the band, and youthful silliness was one of our primary goals with him. We knew he wasn’t going to get as much development in the series as the other band members, so making him adorable and fun was key. We went into his design with the idea that we wanted him to be everybody’s best friend. 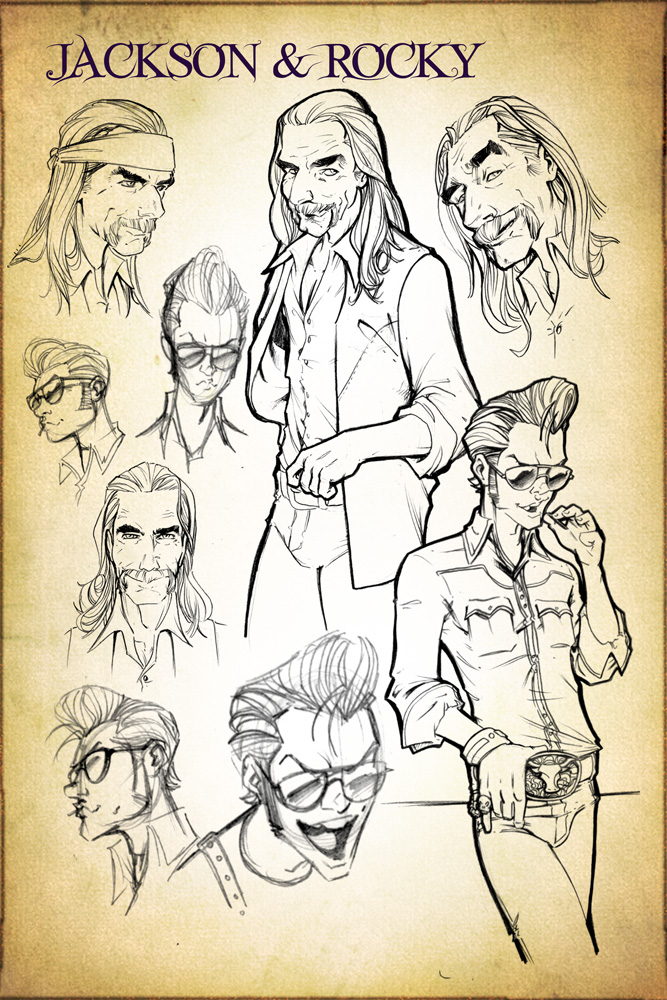 Rocky was an easy but crucial character to design. We needed readers to love the guy immediately so they’d feel something when he dies. His look is pure rockabilly punk; in the original scripts, he was actually named “Rockabilly.” Jackson was, hands down, the easiest design of all to get right. From the moment we conceived of his character we only had one image in our heads and it flowed out on paper in the first few tries. Then it was just a matter of refining the look to get the perfect balance of classic rock and hippie, while still making him feel like somebody you would respect right away. 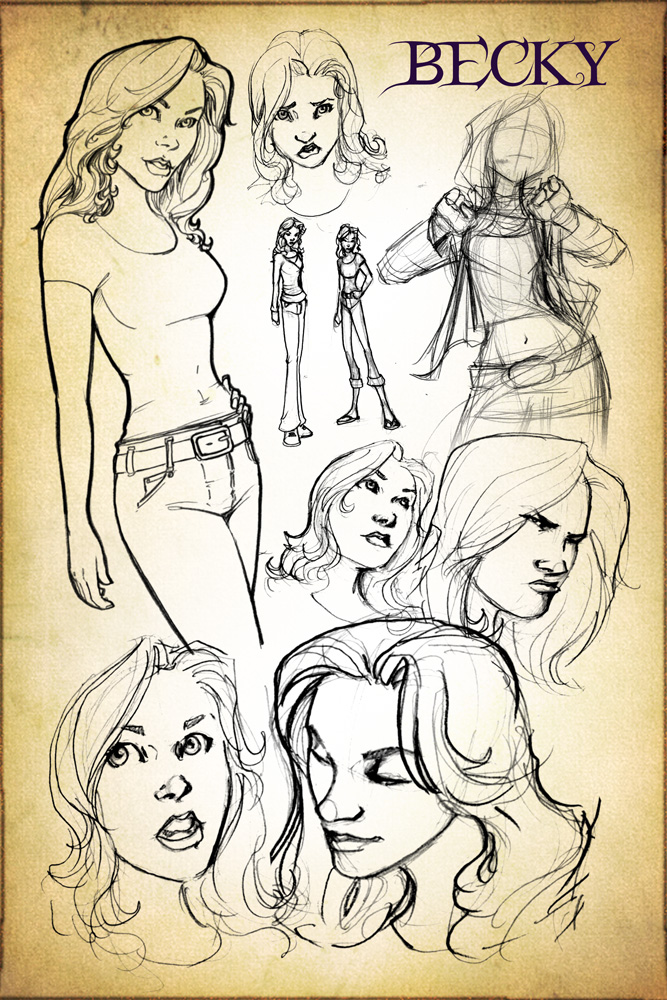 Donna’s sister plays a very large role in the book starting in the second act. She transitions from the Gloom into color, growing from a “Mommy’s Girl” into a rebel. Her design rests somewhere between ordinary clothing and the brighter garb of Donna and her friends. We wanted to show that not everybody who leaves the Gloom has to become a wild Bohemian rocker. Becky takes after her mother, so her face, hair, and carriage were modelled to match Jane. She’s a nice balance of maturity and youth, though her story arc demanded that she grow up fast. 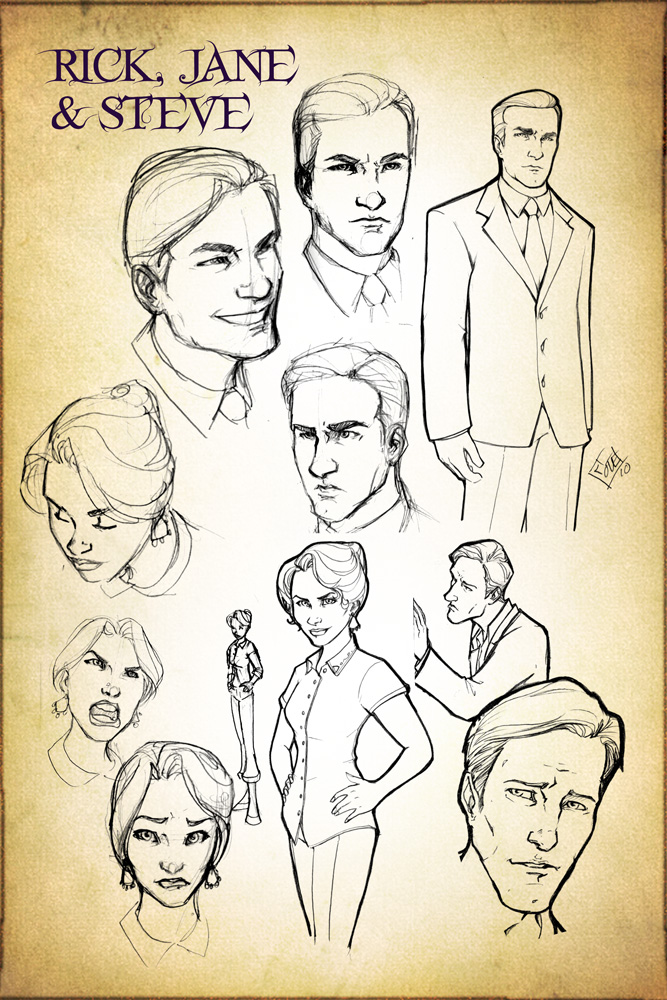 In act two, we wanted to get into the lives of normal people who are ripped from the Gloom. Rick and Jane (Donna’s parents) are supposed to look like the ultimate “Normal Middle-Class Couple.” When first introduced, they wear only suits and always have tightly controlled hairstyles. Rick sheds this quickly, but rather than a bold new look, he just gets scruffy and unkempt. We tried to show that he hasn’t really changed much, so his clothing remains the same. Jane finally has her own transformation in the ninth chapter– symbolically letting her hair down at last. She’s still a woman who loves being a mom more than anything, though, so we dressed her like a fun, hip mother. Through Steve, we wanted to confront Jane with the contrast between what her husband had become, and a guy who embodied the hard-working businessman he used to be. 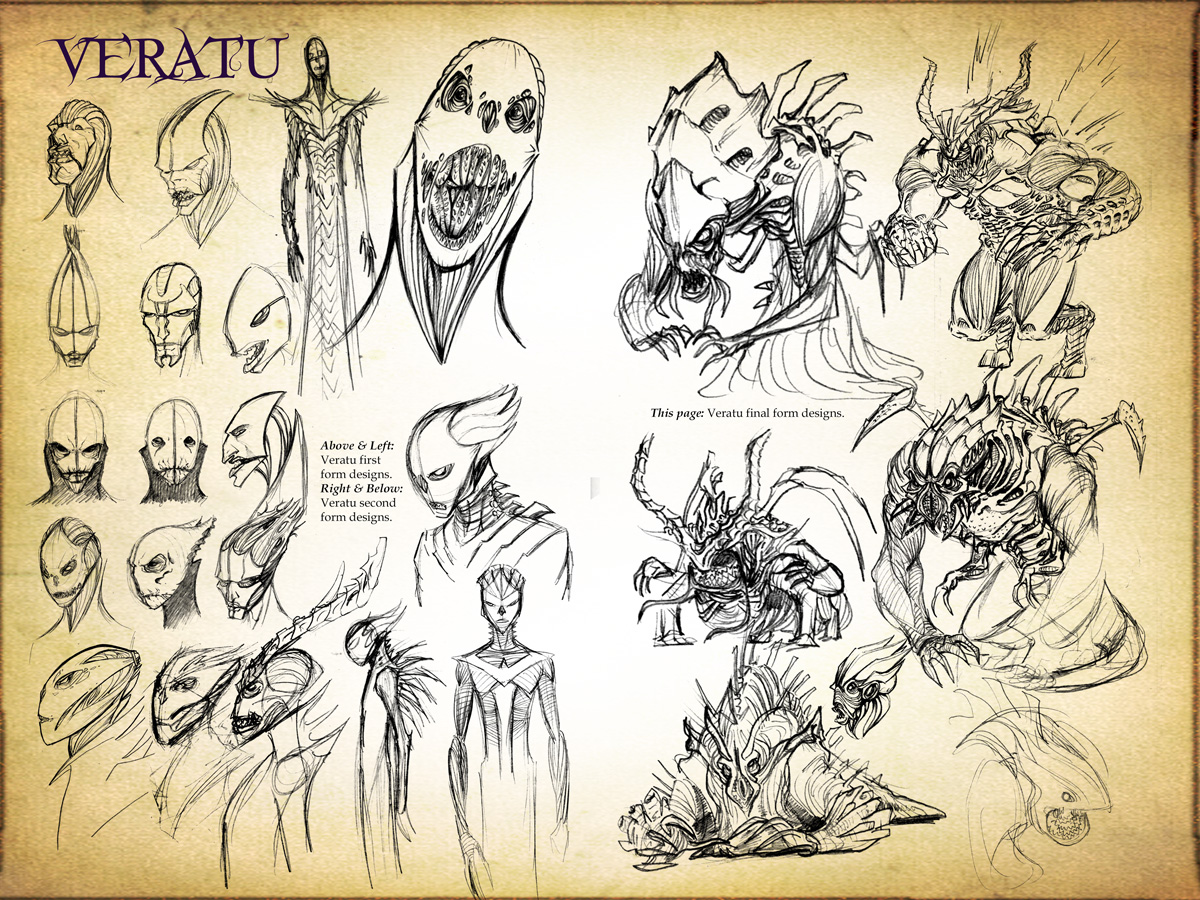 The Veratu were a tough tightrope walk. We were constantly pushing back and forth to make them look humanoid enough but never too human. We decided that adding the mask of human skin pushed them over the edge into being genuinely scary. Adam honestly never cared for the design; it was Comfort who insisted it was the right way to go. As hard as the initial design was, we still had to transform the main Veratu character two more times: into a “perfected form” and then a big scary monster. The Veratu (both the group and their leader) probably represent our biggest artistic challenge for the series, and it took both of us to find just the right look. 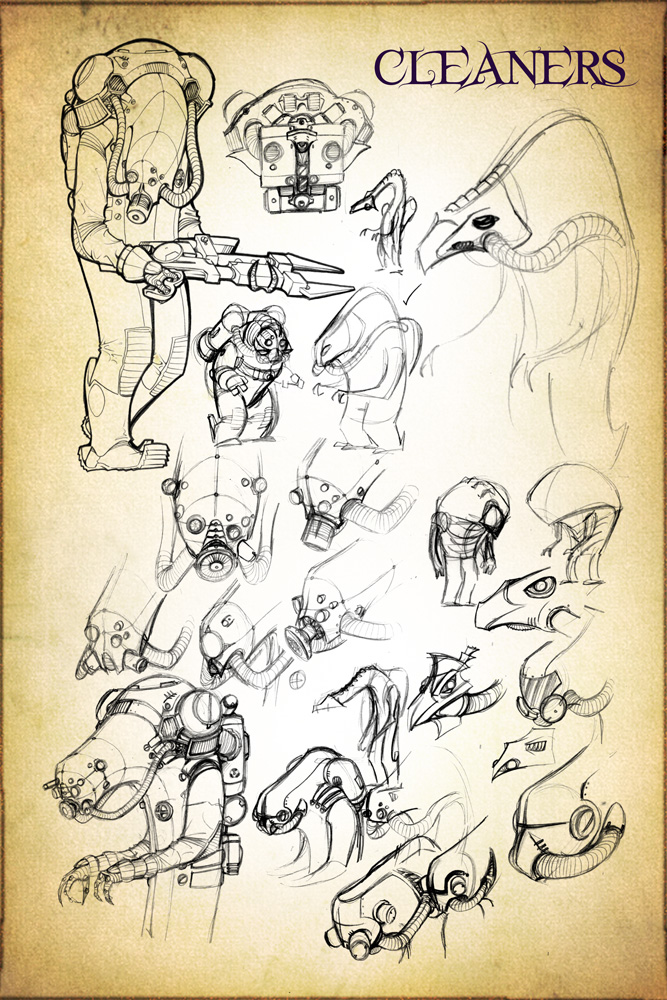 The Cleaners were a tricky design challenge. We didn’t want readers to suspect they might be human until we were ready for that revelation, at which point it had to be visually reasonable. The biohazard suit serves two purposes. First, it represents the Cleaners’ role as the caretakers or janitors of the Gloom. Second, it’s a play on the fact that the humans inside created the Gloom as a kind of sterilization of the world. We wanted the Cleaners to make people feel the way the Skeksis made us feel the first time we watched Dark Crystal as kids. Even though they’re big and slow, you just get creeped right out whenever you see one. 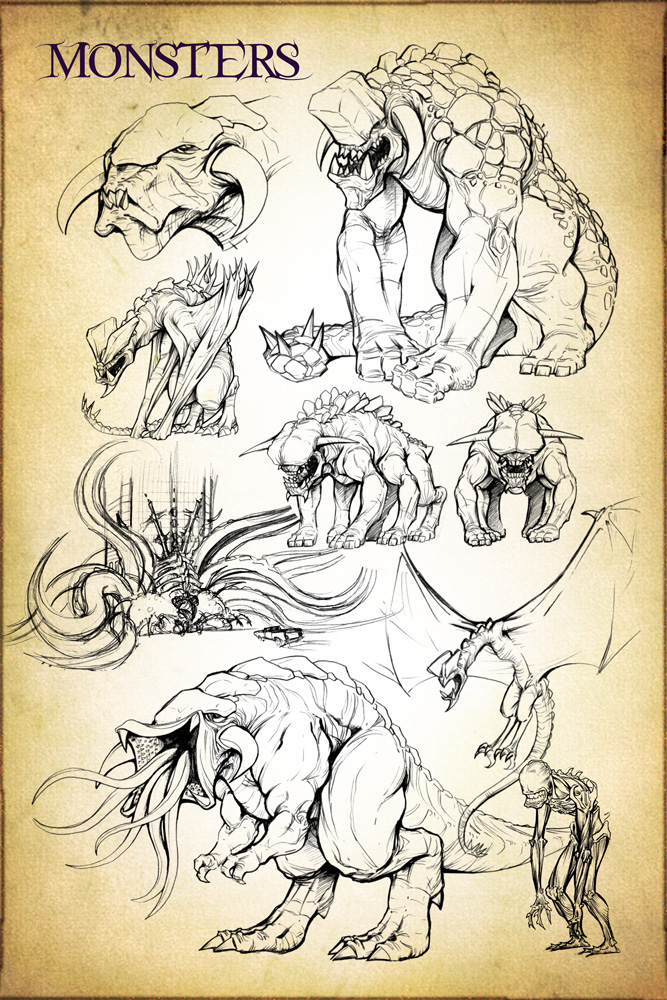 The Gloom is not a place of creativity. With that in mind, we designed the monsters that defend it to fit into rigid roles: scout, interceptor, anti-vehicle, airborne, and so on. Each creature within those subtypes are identical– individuality is not valued within the Gloom. None of the monsters of the Gloom have eyes (except the spy birds). They can sense non-Gloom lifeforms through an innate kind of radar. We don’t see monster creation as something we excel at, but we put everything we had into making these guys scary and deadly and just mean looking.

The Fashion of Rainbow in the Dark 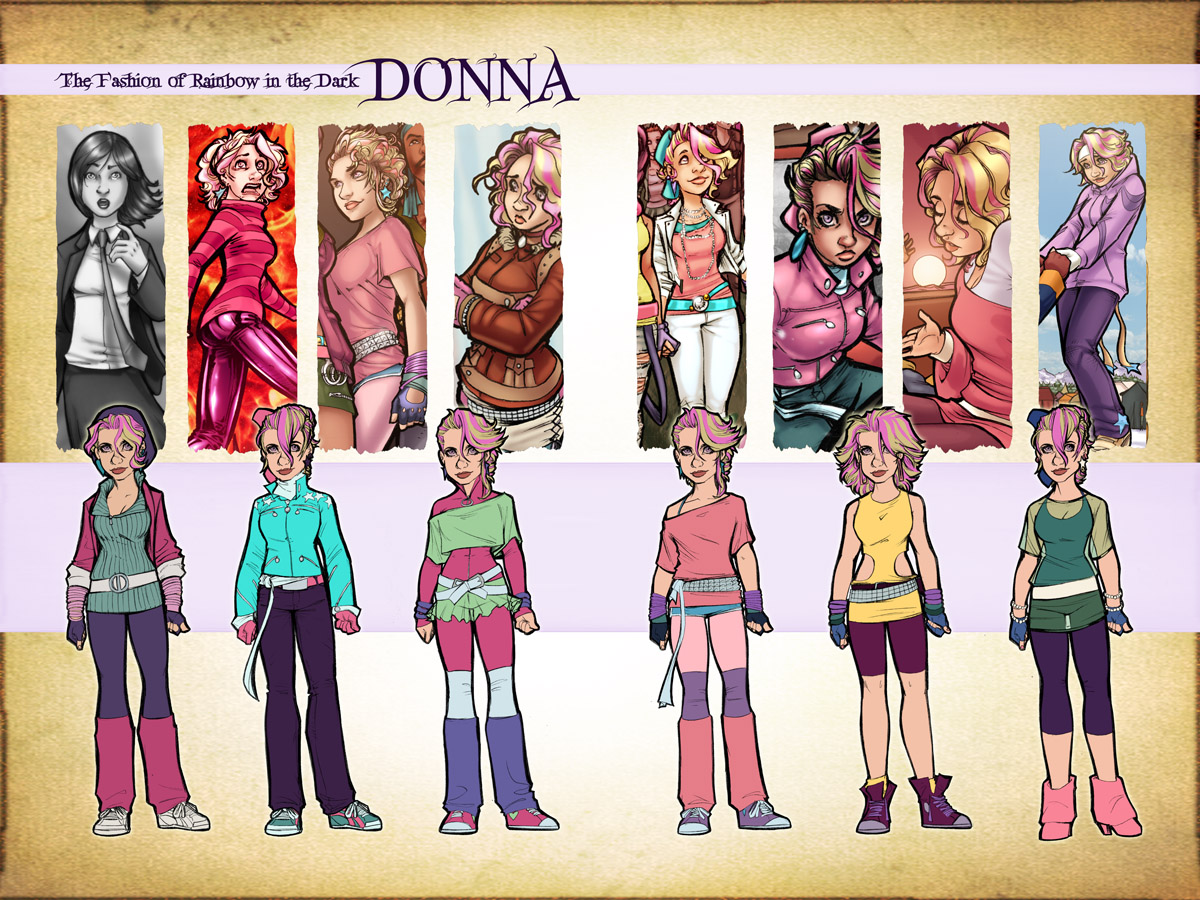 Donna’s costuming is designed to reflect a girl playing dress-up. She emphatically loves her new life, but doesn’t always feel she fits in. Based on ‘80s girl-rock, using pink as the primary color reinforces the make-believe dress-up quality of her fashion choices. While the other characters all have some level of underlying toughness, Donna’s body, hair, and clothing are full of soft curves and bounciness. She’s a normal girl, fun and sweet but also vulnerable, and she knows it. Her clothing and hair reflect the confident person she wants to be, even if she isn’t sure that’s who she really is. As she matures, her costuming matures to show her growing confidence– she no longer has to dress up and pretend. She becomes the person she wants to be. 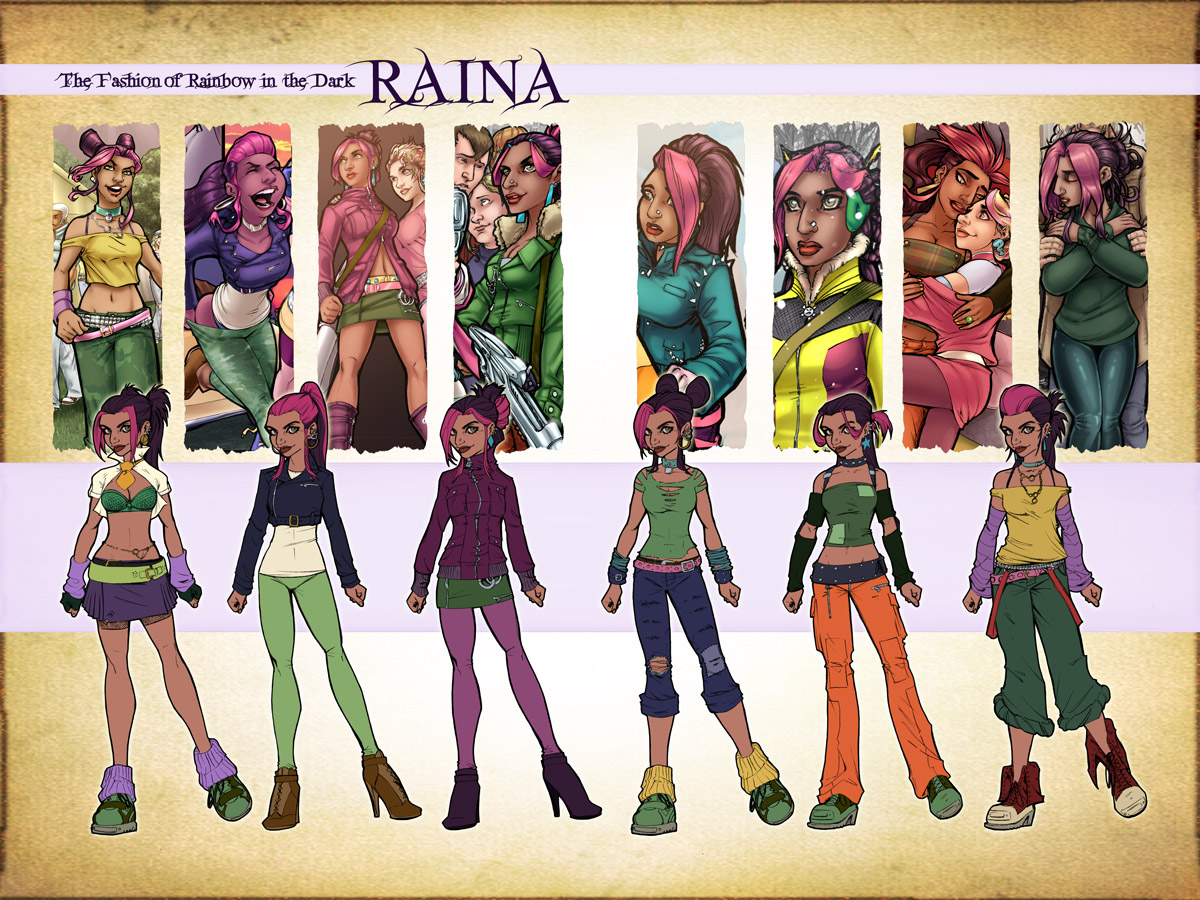 Raina was always going to be the scrapper of the team, and we decided on a punk look to match her punky attitude. Green is her dominant color, and her clothes are intended to look a little like she just grabbed whatever out of a pile on the floor each morning. It’s the style of no style. Her hair got more attention than any other character. Every issue it was something different– sometimes multiple style changes per issue! We wanted her whole look to feel playful and aggressive, tough without completely sacrificing femininity. She’s someone who does not give a single care what anybody else thinks about her. She dares people to have a problem with her, then laughs at them for not getting the joke. 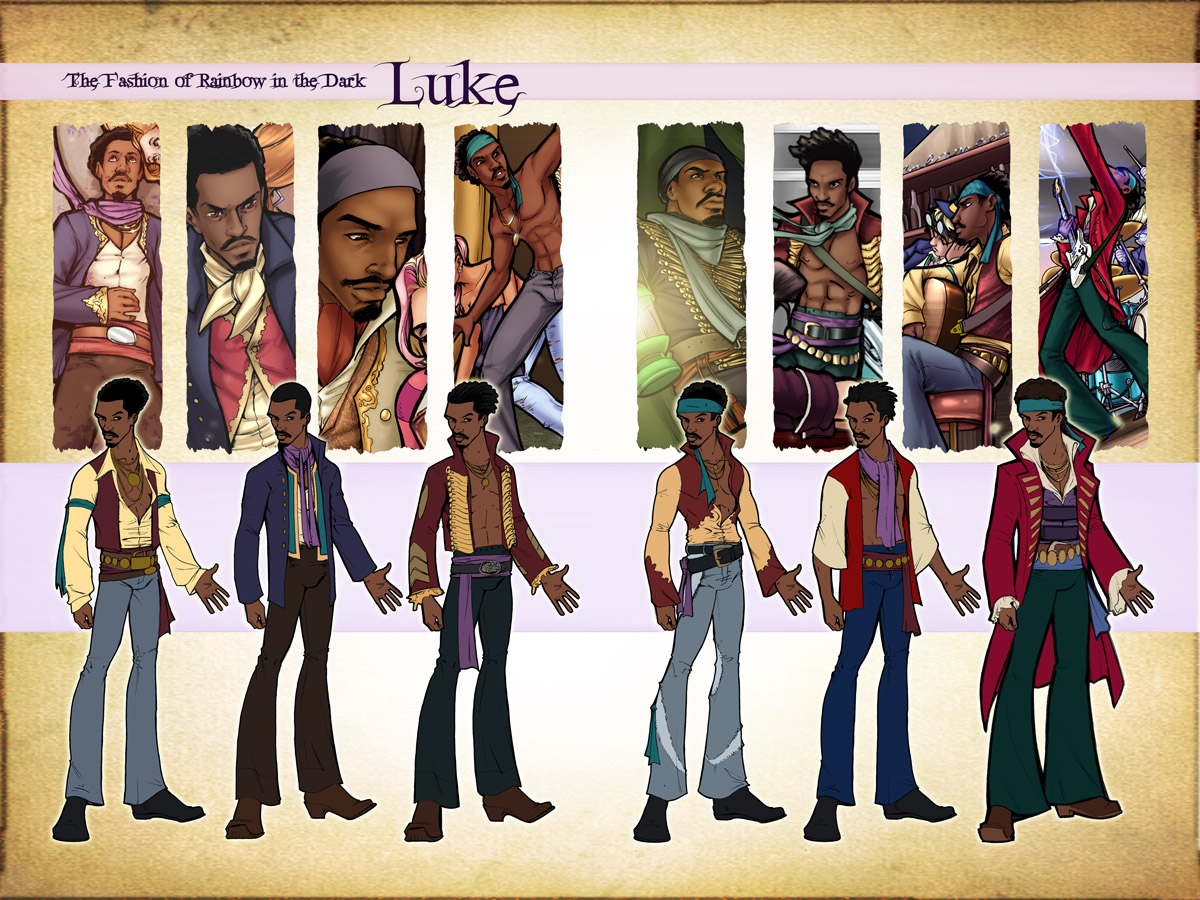 We had a clear vision for Luke from the earliest days of the series: Jimi Hendrix as a Jedi Knight. His look was immediately set in our minds as a psychedelic rocker with open chested, blousy shirts, flowing scarves and tight slacks. He wound up with a look that was equal parts pirate, 18th century soldier, and Romani vagabond. We used bold reds and golds to show his passion and fire, but when he lost his way and went on his vision quest his fiery red turned introspective blue. It took a long time to figure out his hairstyle. The windswept look gives him an interesting feeling of movement when in action and thoughtfulness the rest of the time. 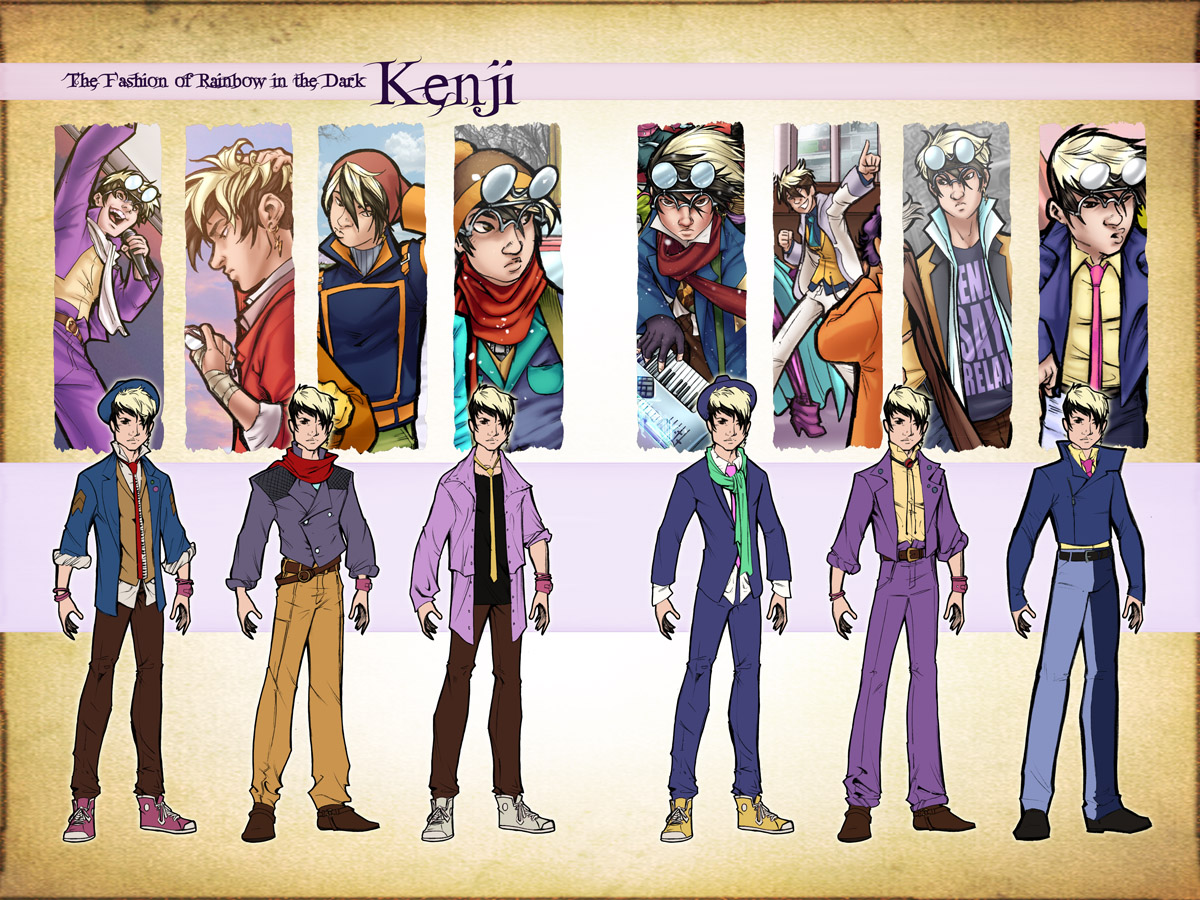 Kenji was frequently the most difficult guy to dress. His look was based on 1980’s New Wave music and Synthrock. It gave us a lot of options, but for some reason every outfit seemed to head off in different directions. The result is that he’s a pretty eclectic dresser, but we think it works for the character. The defining thing about his wardrobe is that he almost always wore some kind of jacket and a beat-up pair of sneakers. He’s clearly a mix-and-match guy. Few of his outfits are intended to look like all the pieces belong together. He reserves matching for special occasions. The rest of the time, he takes random suit pieces and wears them rumpled and casual. 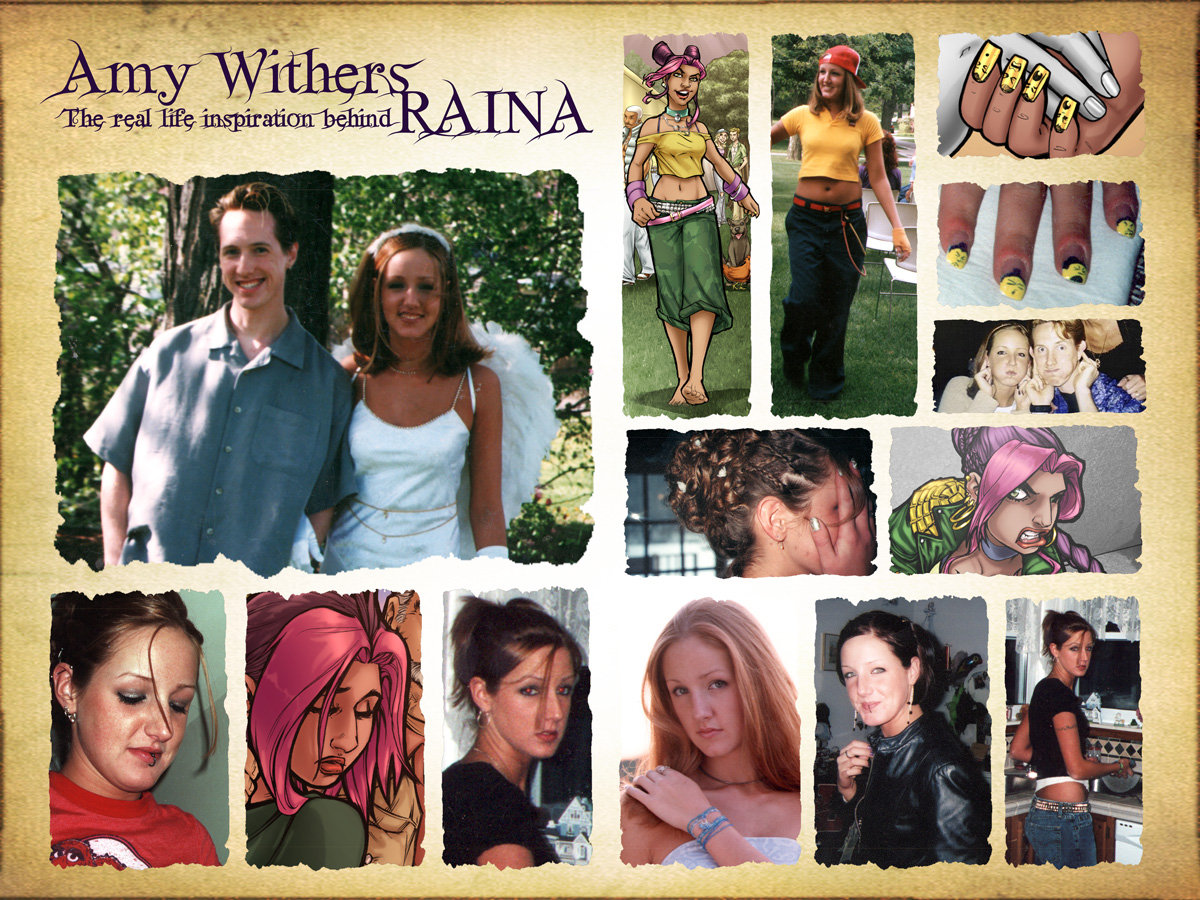 When Adam was designing Raina’s look, he was inspired largely by his little sister Amy. Like Raina, she was a girl who did her own thing and didn’t care what anybody else thought about it. She made her own clothes, designed her own hair, and always held a carefree attitude of originality in a sea of conformity. Seeing her was like knowing magic could still exist in the world. Amy passed away in 2006 at the age of 22, but her spirit is so alive around us that we wanted to put some of that magic on the page. So if you saw Raina and thought she seemed cool or fun or original, that’s because of Amy.

Above you can see some examples of how Amy’s style influenced Raina, from her fashion to her general attitude. Raina’s method of doing her hair (namely kind of making it up as she went along) was all Amy. She even wove some of Adam’s old action figures into her hair once. It was a battle scene on her head! And Raina’s Sumo wrestler nails were based on something Adam painted on Amy’s nails back in high school. He’d do nail art for her from time to time, but she got way better at it so his “skills” were no longer required.