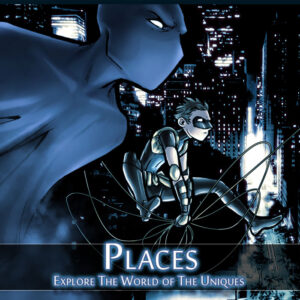 Madison City is located in northeastern Pennsylvania on the Delaware River and was known primarily for industrial manufacturing and shipping. In the 1960’s it became one of the first cities to incorporate energy created by Uniques into its energy grid. As one of the more progressive cities for Unique/Typic relations, it has a larger Unique population than most cities, and is home to a number of prominent superheroes, including Speed (formerly of the League of Seven).

Madison City had a population of 703,064 as of the 1990 census, but has seen a substantial population growth since 1994. After the New York Disaster, Madison was one of the primary cities to receive people displaced by the attack. Current population estimates range from 900,000 to just over one million. The high demand for manufacturing and construction to support the rebuilding of New York City have largely kept the economy of Madison stable even while the rest of the country entered a deep recession. However, the influx of displaced persons has put a large strain on government and private institutions grappling with the population surge.

New York City and affected areas of New Jersey are estimated to begin allowing citizens to return to new housing as early as summer of 1997. What that will hold for Madison City is yet to be determined, but as reconstruction-related contracts begin drying up, the City’s economy is already beginning to suffer rapidly increasing rates of unemployment. If Madison’s population remains greatly elevated from pre-Disaster levels and jobs continue being eliminated at the current rate, a city-wide depression is expected.

At New York’s height, it had a population of over 7 million and was home to world renowned business and financial institutions, and was an international center for higher learning, arts, and culture. It held one of the most diverse populations in the world speaking as many as 600 languages. It was the home and birthplace of people like Theodore Roosevelt, John D. Rockefeller, Woody Allen, Dick Wright (Countryman I), Sam Weir (Mercury), and Estee Lauder.

In 1994, New York City was the target of the largest nuclear terrorist attack in history, perpetrated by the militant Unique Current and his regime of followers from the rogue state of Haven. Over 2.5 million people died in the horrific event, with over 4 million displaced. Combined with the psychic shockwave that eliminated all the Psions of the world, bringing down the European Psi-Net, there was panic and confusion on a global scale. International markets crashed, and the world economy fell into a deep recession.

In the immediate aftermath of the Disaster, advanced hazard crews and specialized Uniques were able to scrub the radioactive fallout, reducing rad levels to acceptable limits within 8 weeks. Reconstruction began almost immediately, spearheaded by billionaire philanthropist and New York City native Alistair Houston’s Houston Enterprises and aided by reformed villain Adam Hayes (The Destroyer). With an unprecedented level of international aid, the rebuilding efforts have moved at a dramatic pace. New York City is expected to become a true “City of the Future,” with plans to open select housing for the public as early as summer 1997. It is unknown whether the entities which made the city the “Capitol of the World” will return, having largely relocated to London after the attack. It is likely to become a populous and prosperous global city again, perhaps on a scale never before seen, but international trade, business, and ambassadorial centers may very well remain in the UK for the foreseeable future.

Located just outside Madison City, PA, the Sage Estate was to be both a home and one of the premier educational facilities for Uniques in the world. The main building’s east and west wings were completed in the spring of 1994, with the school scheduled to open its doors to students in the fall of 1995.

In 1994, John and Sue Sage (Mentor and Kinetic, former leaders of The League of Seven) died in the New York Disaster. Without the Sages at the helm and with the loss of all Psions (save their daughter, Hope Sage) the project was put on indefinite hold. The Estate remains empty to this day.

While construction on the Estate was never finished, the bulk of the work was done and it holds several state of the art facilities including a SAFE Room and a Saisho generator. The Estate is being held in trust until such time as Hope Sage turns 21, pending acquisition of certain permits and legal releases. When this happens, it will be up to her to decide the ultimate fate of what was to be her family home.

Ironside is a federal supermax prison that specializes in restraining alpha-level Unique criminals. The heavily fortified facility is located on a man-made island on the Delaware Bay off the coast of New Jersey and incarcerates roughly 1,500 inmates at any given time.

All executions of Unique prisoners occur at Ironside, which has a range of facilities designed to carry out executions on Uniques immune to standard methods.

Ironside is the strongest and most modern prison in The United States. It has both Typic and Unique guards and personnel and a full complement of CALIBRE soldiers for emergencies.